Tansley Reads! Who We Are

The Tansley Reads! book club began as one of several “Connection Groups” at Tansley United Church, in Burlington Ontario, Canada. The group was formed in 2006 to offer members of the congregation a way to know one another better by discussing books and sharing some of their own stories. From the beginning it was decided that we would not restrict ourselves to religious or spiritual books, and that members would select novels and biographical works that appealed to them. We currently have about 25 members, and usual attendance at meetings is 18 – 20 women (men are welcome, but, well, …). Because we are such a large group, we have had to adopt some non-traditional approaches to book discussions. But we wouldn’t have it any other way.
Posted by Tansley Reads at 12:12 PM No comments:


We have a coordinating group of 2 – 5 members, who meet ahead of each meeting to decide on questions, an ice breaker, and items for our “focus table”. The coordinators search for questions on various websites (the publisher’s book club guide e.g. penguinrandomhouse.ca/book-club-resources, litlovers.com, authors’ websites, etc.) and use them as input, then adapt or compose the questions each month based on what they think will stimulate discussion in this group.* Experience has shown that informal, personal-reaction-based questions work best for that purpose. One member takes responsibility for devotions at the beginning and end of every meeting. We take turns providing refreshments – sometimes themed to the book.


Once a year, the whole group meets to choose the books for the year, usually 8. Each member can nominate a book, and give a bit of a pitch for it. It can be a book she’s read or one that she wants to read. We do ask that the nominated books be readily-available, from the library or at a reasonable price. Then everyone votes for their favourite 8 books and those receiving the most votes are the choices for the year.


One of our unusual features is rating every book. This began so that the book club could recommend a book to the congregation for their summer reading. We have made changes to the rating system over the years, but it has always consisted of categories for which everyone gives a value, individually. Those are then tallied each month after the meeting, and an overall score given the book. (At our annual book sale, buyers flock to the Tansley Reads table and we quickly sell out of the books we’ve read in the group, particularly the “winners”.). A copy of our current rating chart is posted to this blog, and the score we gave the book is shown in its file.


The “focus table” is also unusual. It consists of objects and pictures that are suggested by the book. Sometimes all are provided by the coordinators; other times, everyone brings something.


The ice breaker is designed to help members get to know one another better and usually reflects the theme of the book in some way. We break off into small groups of 3 or 4 to share that part of the meeting. We have cards with colours, numbers and symbols on them, and use those to randomly assign and mix up the groups each time. Often the conversations are laughter-filled and it’s hard to get everyone’s attention for the next part of the meeting – that’s why refreshments often follow.


In 2018 we decided to start posting our questions on this blog. We started with some previous books, and plan to add each new book after our meeting. Anyone who wants to use these questions is most welcome to do so. Our scoring guide is also posted.


*Unfortunately, we have not kept track of the sources of questions in the questions sets on this site. We are indebted to the publishers, authors, and others who have made these resources available.

Posted by Tansley Reads at 12:11 PM No comments: 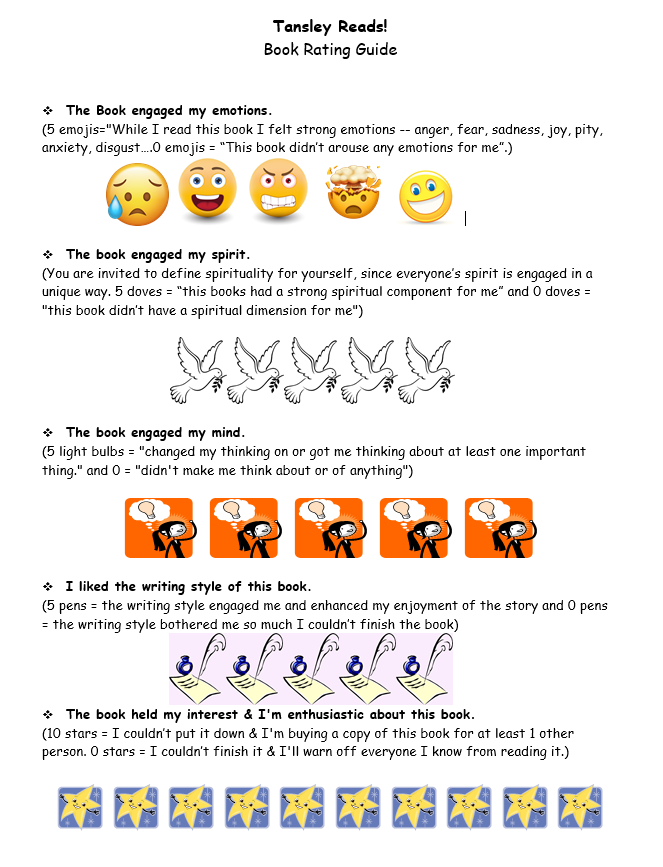 Posted by Tansley Reads at 12:09 PM No comments:

Posted by Tansley Reads at 2:03 PM No comments:

Icebreaker
What would your reaction be if you were called for jury duty?

1.      Everyone tells Jilly that Laura Trussardi’s murder is an open-and-shut case, and yet she agrees to defend Vincent.   Why do you think she takes the case?  And what keeps her digging for the truth even when she’s threatened?

3.      When we first meet Cy, Jilly explains that he has been her mentor and friend, even though they’re destined to oppose each other in the courtroom.  What was the relationship between Cy and Jilly?  Why did he become so vengeful toward her?

4.      What do you think about Cy’s relationship with his wife?

5.      Why is Jilly drawn to Damon even after he is acquitted?  At the end of the novel, was she justified in seeing Damon’s crime as separate from the person who committed it?

6.      What effect did Jilly’s sudden illness have on the plot?

7.      Did the inclusion of the Pickton storyline in the plot, enhance or detract from the mystery?

8.      In the final chapters of the novel two deep secrets are revealed.  Were you surprised by either?

9.      Do you think Jilly will approach cases differently going forward?

10.  As the former chief justice of the Supreme Court of Canada, McLachlin’s view of the legal system should carry some weight. Were you surprised by the way our legal system was presented in this novel?

11.  Many of the main characters get a second chance in the novel.  Discuss the role of leniency, grace, and rehabilitation within the legal and penal systems.

12.  Imagine you practiced law.  Would you be a defense attorney like Jilly, a prosecutor like Cy, or a judge?  What kinds of cases would you prefer to take?

13.  Quick round: What did you think of the book? Is there anything you want to discuss that we missed?
Posted by Tansley Reads at 12:43 PM No comments:

Forgiveness: A Gift from my Grandparents by Mark Sakamoto

Forgiveness : A Gift from My Grandparents
By Mark Sakamoto
Tansley Reads Score: 68.71%

Icebreaker
If you could only take 150 lbs of personal effects and survival items with you, what would you find the most difficult item or items to leave behind?

1. How do you think you would react if you were suddenly uprooted by the government with little help?  Would you be as accepting/forgiving as the Japanese community seemed to be?
2.  Japanese culture emphasizes respect for those in authority, stoicism in the face of adversity and pain, not making a fuss or creating a scene which would embarrass your family or ancestors, working hard at every task so as to make those around you proud. On p. 96, Mitsue’s father voices this influence when he says “shikata-ga-nai – it can’t be helped” when faced with the decision of the family leaving to go to work the Alberta beet fields.

How did these cultural norms affect the decisions and demeanor of the Japanese in Canada during the war years?
3.     As in the question above, the phrase Shikata-ga-nai is generally translated to mean “It can’t be helped. Stuff happens. It’s how you deal with it (the stuff) that makes your life.” Which character for you best handled “the stuff” in their life?

4.  When Mark Sakamoto first interviewed his 90-year-old grandmother about her experience, he asked why she had never talked about it before. She replied, “Because hate can come back”. She was afraid to acknowledge it by speaking of it. How do you feel about this? Can hate come back if you speak of it?

6.  Why do you think Mitsue and Ralph became “instant friends” (pg. 182)?
7.    Which generation of characters most resonated with you?

8.  What revelation in this story did you find the most surprising or interesting?

10.  Ralph avoids solitude because it makes it too easy to think about his time in captivity. Mitsue, meanwhile, experiences isolation in the form of segregation when she and fellow Japanese‐Canadians from Vancouver, are rounded up and dispersed— losing the sense of community they’d shared. In today’s society, how do certain groups of people face increased isolation?
11.  There are a number of instances of the Canadian Government issuing apologies to different groups for injustices inflicted on them in the past e.g. First Nations, Home Children from England, Japanese Canadians, a boatload of Jews fleeing the Nazis being refused entry to Canada during WWII.  Do these apologies make it easier for citizens to forgive? Are they meaningful?

12. Did the fact that events in this memoir were written about Canadians and happened in Canada affect your feelings about the book?

13.  Quick round: What did you think of the book? Is there anything you want to discuss that we missed?

Posted by Tansley Reads at 1:47 PM No comments:

A Noise Downstairs by Linwood Barclay

A Noise Downstairs
By Linwood Barclay

Have you, or anyone you know, had an experience with the paranormal or ghosts?

2.  Kenneth was driving erratically, if that was one of your friends, what would you have done?
3. Paul and Charlotte’s relationship seemed to be on rocky ground before he was attacked, but she did an about face afterwards.  What did you think of their relationship?

4.  Why do you think we were introduced to Gavin Hitchens (Anna White’s patient)?  What purpose did he serve in the story?

5. Was it a good idea for Paul to investigate what had happened to him?

6.  What role did Gilford Lamb and Harold Foster play in developing the story?
7.  What did you think of the typewriter noises in the night?

8.  How might the story have unfolded if Kenneth had not agreed to allow Paul to visit him?

9.  When did you figure out Len and Gabriella's roles in the story?
10.  After overhearing Bill say to Charlotte, “It worked”, Anna follows Bill.  Why did she do that?
11.  Based on what we’ve read about Anna White, would you have had faith in her as a therapist?

13. What was your favourite plot twist/red herring?  Which character provoked the strongest response from you?

14. What did you think of the ending?

Posted by Tansley Reads at 12:21 PM No comments: